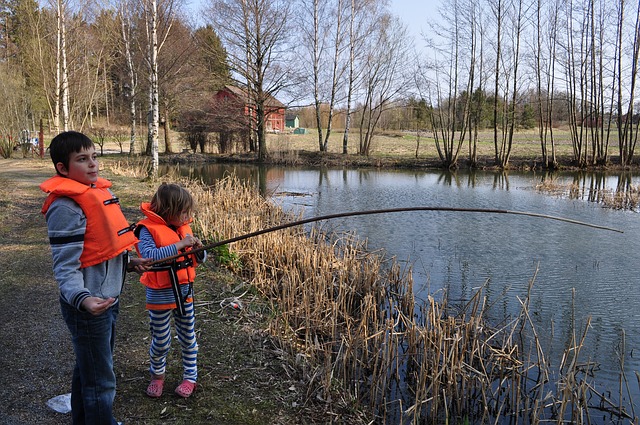 GREENVILLE, Ky. – A year ago few in Muhlenberg County had even heard of an event called "Take a Kid Fishing" Day.

Now, after an estimated crowd of at least 400 showed up Saturday, June 8th, with rods and reels in hand, it's pretty clear that kids, adults, planners and sponsors have fallen for this first time event…hook, line and sinker.

Since the original event date of May 11th was rained out, no one was sure just how many people would show up for the backup rain date. The answer was clear, as cars, trucks and transit vehicles packed with happy children rolled in to the Luzerne Lake parking area just before 9am.

Greenville City Administrator Ben Van Hooser summed up the weather, the improved condition of Luzerne Lake, and the fun atmosphere among both the kids and adults as the event began. "The weather is perfect, people are rolling in. You could not have scripted this any better." Van Hooser told Surfky.com News. "A lot of dedicated people have worked for many months to make this day a reality. And just to make sure these kids have a great first fishing experience for many, yesterday we stocked the lake with over 650 pounds of catfish; most are 12 to 15 inches long. That will be the thrill of their life for those who have never fished before." Van Hooser added.

Video coverage of the event and further details are below...

"Randy put a similar event together long before any city or county government stepped in to assist. He's to be thanked for his experience and willingness to work." Van Hooser noted.

There were lots of prizes to help make this day of fishing even more fun, including twelve new bikes that were given away, donated by First Kentucky Bank.

Many on the organizing committee couldn't say enough about the man they called the "go to" person in making this big day a reality. Charles Turner of the Pennyrile R.C. and D. District office in Hopkinsville has helped plan numerous fishing events like this one in Cadiz, Hopkinsville and other counties across the state. Turner takes these events very seriously when it comes to the small details, and he drove from Hopkinsville Saturday to make sure the months of planning paid off for the kids.

"The majority of kids that participate in something like this have probably never been fishing before, and they are just real excited about catching that first fish. The very positive thing you see from this is that you have the whole family involved, the children, mom, dad, grandparents, aunts and uncles." Turner stressed.

"We'll give prizes for the largest fish, the most fish caught, and even the smallest fish. The age groups include ages 3 to 5 year olds, ages 6 to 8, 9 to 11, and 12 to 15 year olds. The winner in each of those four age groups will receive a free bicycle. Each participant can only win one bike though, because we want to spread out the winners so we have as many as possible." Turner said.

"Today, everything looks great. A few days ago we thought we were going to get rained out for our rain day. But we've been blessed. Hundreds of people are showing up." Turner said with a big smile, looking out over the huge line of young first time anglers and adults along the banks of the lake.

"I also want to say it's been a great opportunity to work with this planning committee. Everybody involved has stepped up and done what they said they were going to do. This is a great start." Turner told SurfKY, but noted that if the event is to grow as it has in other areas, "no matter how well an event goes, you always want to tweak it each and every year to make it better."

Greenville Mayor Ed DeArmond was all smiles. "This is a great day," DeArmond told SurfKY. "Not just for the city of Greenville, but for the entire county. The whole purpose of Take A Kid Fishing Day is that it gives children a great chance to bond with their parents and other adults in their life. For many of these kids this will be an event they will remember for the rest of their life. When I was growing up my parents took me fishing and hunting, and it creates a special bond, it's a character builder. I also want to commend all the sponsors, the people on the planning committee that did all the heavy lifting as far as making sure everything was done right, and the many volunteers that are here today helping out. It is truly a great day."

As a former State Police official, DeArmond has seen his share of kids who have made wrong decisions in their lives. He stressed that events like "Take A Kid Fishing" can really make a difference.

"You really don't see kids out enjoying nature the way you did twenty or thirty years ago. If we can get our kids more involved in being outdoors, it is a deterrent, as we try to defend against the drug scourge and the crime that we're having today. Something positive like this gets kids outside, away from computers, video games and television. It gets them focused on something worthwhile." DeArmond stressed.

DeArmond noted that "during my more than 30 years with the Kentucky State Police I sponsored more than thirty kids at the Trooper Island Girls and Boys Camp at Dale Hollow Lake near Burkesville. The response got so big we would have to get a county school bus to get them all there, it became a huge success. That experience helped turn a lot of kids around, and some even went on to become State Troopers. I've had many adults come up to me and say 'You sent me to Trooper Island years ago, and it changed my life.' We hope this event will grow and have the same effect for our young people," DeArmond said.

DeArmond and other officials, including Greenville City Administrator Van Hooser also noted that the Luzerne Lake event may be even bigger and better as vast improvements are made to the lake area.

Tommy Barton, Executive Director of the Greater Muhlenberg Parks and Recreation System and a part of the planning committee, agreed with other planners that the day was a huge success.

"I think this is amazing. We have at least five hundred people here, counting adults. Fish are coming out of the water left and right. I think the city of Greenville has done a great job of improving this lake, and we are going to make it a great park one day. This event seems to be proving that right now.  We are going for an $80,000 grant and we're matching it. We plan to put a walking trail around the lake and a big shelter. We really need to spruce this place up. It's one of the great natural resources in the area. It's just one of the many improvements we're trying to do around the county." Barton said.

Joel Elliott, of Greenville, brought his son Hunter, age seven, for a day at Luzerne Lake. Surfky asked Hunter if he had ever caught a fish.

"Yeah, I caught a medium and Dad caught a small."  Hunter said.

Hunter's dad told reporters, "I think this day is wonderful. I didn't expect this many people out here. It is great!"

SurfKY News wishes to recognize the many individuals and sponsors who spent literally months and months to make three hours of family fishing and enjoying Muhlenberg County's natural beauty a reality.