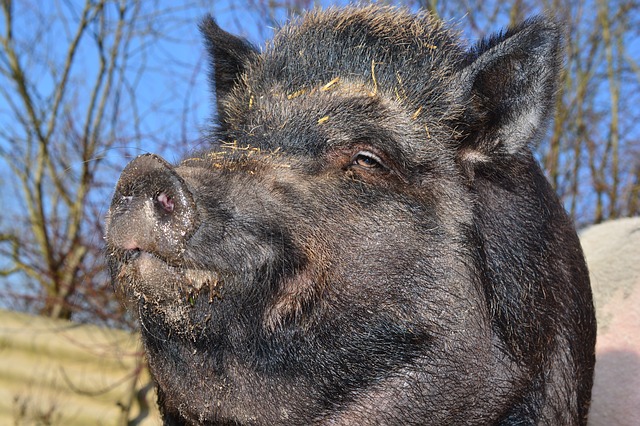 Residents of southern Hopkins County, northern Christian, and western Muhlenberg County have recently reported encounters with wild pigs, an invasive, non-native species to the area. Other isolated populations exist elsewhere in western KY as well. In fact, wild pigs are non-native to the continent and it is believed that they were introduced as a food source to what is now the southeastern portion of the US in the 1500s by the Spanish explorer, Hernando DeSoto, according to Mississippi State University (MSU). Over time and as the animals escaped from their enclosures, wild populations of these hardy omnivores grew and spread. The situation was exacerbated as well by free-range livestock management practices.

Young said that the KDFWR is dealing locally with wild pig populations in a centralized area stretching from the Pond River bridge at highway 62, just northeast of White Plains, following the river corridor upstream (south) to Christian County, ending near Cave Springs Road. He said populations have also spread down the west fork of the river, just south of White Plains and crossing highway 813 (Apex White Plains Road) but, to the best of their knowledge, not as far as highway 41.

Beginning approximately two months ago, KDFWR, working with landowners, began an eradication effort in the area. Anyone sighting or harvesting a wild hog in this or any other area should contact Young at (270) 824-7045 or a local law enforcement officer who will then contact the KDFWR. These reports help the agency by alerting them to where populations may have grown, allowing them to target specific areas in their eradication efforts.

A recent similar eradication program in Hickman County, KY resulted in the harvesting of 350 wild pigs. Young said that the same KDFWR trapper assisting with the local campaign was involved in that successful effort. Although the KDFWR is concentrating on the aforementioned Pond River area, local outdoorsmen have reported to SurfKY News anecdotal evidence of populations many miles north of the highway 62 bridge as well as east of Pond River in wooded areas approaching the city of Greenville.

The US Department of Agriculture Wildlife Services (USDA) is assisting the KDFWR with the operation, providing traps. Young said total eradication is a challenge due to the fact that exact wild pig numbers are not known. “We’ve known about the population for close to 10 years,” said Young. “People had been harvesting them whenever they could, and we worked with landowners, putting out traps.” He said that efforts were “stepped up” following a late-August, 2012 White Plains Town Hall Meeting addressing the issue.

Officials don’t know exactly how the swine infiltrated the area, but they strongly suspect that they were introduced by individuals who released them for hunting. MSU agrees with Young, stating on their website, “Range expansion over the last 20 years is mostly a result of illegal translocation of pigs by humans” and that 45 states now have wild pig populations. The animals are a nuisance to landowners and farmers, causing damage to crops and native flora. They are generally considered not to be dangerous and will avoid humans; however, when cornered or wounded, a lightning-fast charge combined with razor-sharp tusks can cause serious injury. Wild pigs can grow in excess of 500 pounds, with an average weight of 100-150 pounds.

A recently-stiffened KY State Law prohibits the release of a wild pig. The offense is a Class A misdemeanor, and offenders face forfeiture of the right to hunt, fish, trap, or to act as a commercial guide for a period of ten years. In addition, a conviction may now result in incarceration for up to a year, a $1,000 fine, or both.